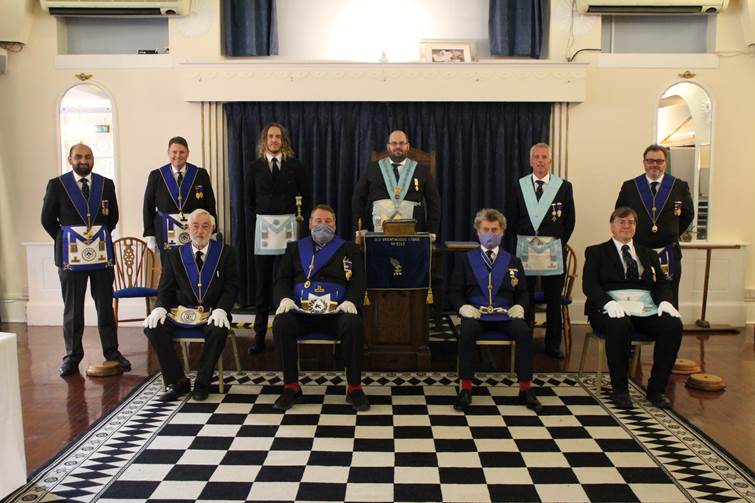 At 10am on Saturday 18th July, just hours after the general suspension was removed 10 members of the Old Brentwoods Lodge 5342, including the WM, Secretary and DC gathered at the Mount Avenue Banqueting Suite and Masonic Hall in Shenfield, Essex, and opened their Lodge.

Little did the Old Brentwoods Lodge members know that their previous regular meeting, back on March 12th  would be one of the last masonic gatherings before The MW. The Grand Master issued the suspension order just 5 days later on March 17th.

The Lodge have a tradition that their next regular meeting is usually held under dispensation on the first Saturday in July each year at their school rather than FMH.  Clearly that didn’t happen but – ever committed to the Lodge and to each other – the Brethren gathered on someone’s driveway with their own chairs and own drinks to catch up and to, effectively, mind the gap.

It was the first time in 88 years the school meeting had not taken place. During discussions however, and once the warrant was consulted, the members realised in fact, their regular meeting in July was always meant to be,  rather than on the first Saturday, on the third Saturday, being the 18th, which they subsequently found out was to be the first day after the suspension lapsed.

So, still under dispensation due to a change of regular venue, the members gathered. Although they decided that initiation which was scheduled to be the main business would be put off to a future occasion, other business was conducted.  They ratified donations of more than £2,250 to various Masonic and Non- Masonic charities, all whilst following strict guidelines from UGLE, Metropolitan and of course their own DC.

Like so many Lodges who were missing the connection, contact and community our gatherings enable,  the Lodge members continued to meet each week on Zoom (not for masonic business, but for social reasons).  One week the theme of the group conversation was “Two things you don’t know about me” with the Member having to guess who had said what.  For example “I’m only 1 inch shorter than being medically classified as a Giant” and “I was once offered a job as a carpenter in a Nepalese Monastery”.

So despite this constant virtual contact and sense of continued community – as Brethren around the world must also feel – all who were allowed to be present on 18th July were delighted to see each other in person and consider themselves lucky that the planets collided to make that date possible for them all.

The members imagined that they were likely to be amongst the first Lodges to meet under the Metropolitan Grand Lodge after suspension, and would be pleased to hear from any other Lodges or Chapters that took place on that Saturday, so an invite may be sent to that unit for a visit in the future.

Founded in 1947, we are an organisation that exists to promote links between masonic lodges under the United Grand Lodge of England which derive their membership from those with a connection to a school.